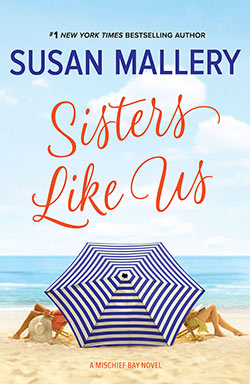 Divorce left Harper Szymanski with a name no one can spell, a house she can't afford, and a teenage daughter who's pulling away. With her fledgling virtual assistant business, she's scrambling to maintain her overbearing mother’s ridiculous Susie Homemaker standards and still pay the bills, thanks to clients like Lucas, the annoying playboy cop who claims he hangs around for Harper's fresh-baked cookies.

Spending half her life in school hasn't prepared Dr. Stacey Bloom for her most daunting challenge—motherhood. She didn't inherit the nurturing gene like Harper and is in deep denial that a baby is coming. Worse, her mother will be horrified to learn that Stacey's husband plans to be a stay-at-home dad. . . assuming she can find the courage first to tell Mom she's already six months pregnant.

Separately they may be a mess, but together Harper and Stacey can survive anything—their indomitable mother, overwhelming maternity stores and ex’s weddings. Sisters Like Us is a delightful look at sisters, mothers, and daughters in today's fast-paced world, told with Susan Mallery's trademark warmth and humor. 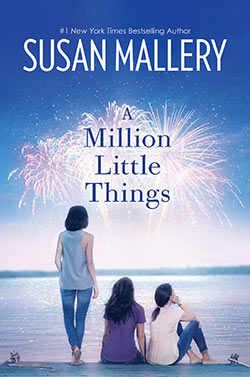 From the bestselling author of The Girls of Mischief Bay and The Friends We Keep comes a twisty tale of family dynamics that explores what can go terribly, hysterically wrong when the line between friendship and family blurs…

Zoe Saldivar is more than just single—she's ALONE. She recently broke up with her longtime boyfriend, she works from home and her best friend Jen is so obsessed with her baby that she has practically abandoned their friendship. The day Zoe accidentally traps herself in her attic with her hungry-looking cat, she realizes that it's up to her to stop living in isolation.

Her seemingly empty life takes a sudden turn for the complicated—her first new friend is Jen's widowed mom, Pam. The only guy to give her butterflies in a very long time is Jen's brother. And meanwhile, Pam is being very deliberately seduced by Zoe's own smooth-as-tequila father. Pam's flustered, Jen's annoyed and Zoe is beginning to think "alone" doesn't sound so bad, after all.

Friendship isn't just one thing—it's a million little things, and no one writes them with more heart and humor than book club sensation Susan Mallery! 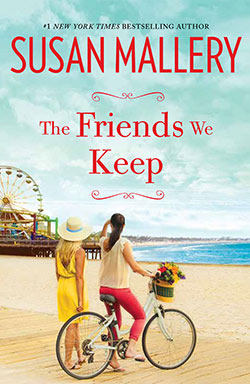 In this insightful and compelling story from bookclub favorite Susan Mallery, three close friends test the boundaries of how much a woman can give before she has nothing left.

After five years as a stay-at-home mom, Gabby Schaefer can't wait to return to work. Oh, to use the bathroom in peace! No twins clamoring at the door, no husband barging in, no stepdaughter throwing a tantrum. But when her plans are derailed by some shocking news and her husband's crushing expectations, Gabby must fight for the right to have a life of her own.

Getting pregnant is easy for Hayley Batchelor. Staying pregnant is the hard part. Her husband is worried about the expensive fertility treatments and frantic about the threat to her health. But Hayley believes a woman who was born to be a mom should risk everything to fulfill her destiny--no matter the cost.

Nicole Lord is still shell-shocked by a divorce that wasn't as painful as it should've been. Other than her adorable son, her ex's departure barely left a ripple in their lives. A great new guy tempts her to believe maybe the second time's the charm...but how can she trust herself to recognize true love?

As their bonds of friendship deepen against the beautiful backdrop of Mischief Bay, Gabby, Hayley and Nicole will rely on good food, good wine-and especially on each other-as they navigate life's toughest changes...together. 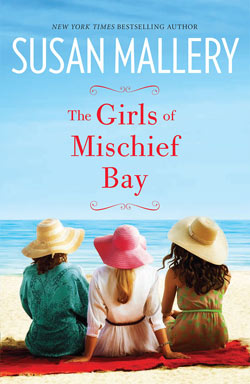 New York Times bestselling author Susan Mallery is world-renowned for her “insightful, funny, and poignant” stories (Booklist). With her brand new Mischief Bay series, Susan brings to vivid color the story of three friends on the brink of a new life.

Nicole Lord wants to be a good wife, but there's a difference between being supportive and supporting her husband, who quit his job to write a screenplay she's never seen. He won't even help take care of their son, leaving Nicole to run the house and work full-time at her Mischief Bay Pilates studio. Can she say enough is enough without losing the man she loves?

Sacrificing a personal life for her career is how Shannon Rigg rose to become Vice President in her firm, but she wonders now whether she made the right choice. An exciting new love with a great guy convinces her that it might not be too late-until he drops a bombshell that has her questioning whether she can have it all. And if she can, does she want it?

Although Pam Eiland has a beautiful house and a husband she loves, she feels… restless. She wonders who a stay-at-home-mom becomes after the kids are grown. Finding sexy new ways to surprise her husband brings the heat and the humor back to their marriage, but when unexpected change turns her life upside down, she'll have to redefine herself. Again.

Through romance and heartbreak, laughter and tears, three women with little in common discover that friends can become family, and that life is richer with sisters at your side.